Our history with Rottweilers

While they may be many breeds of dogs to choose from, our love for the Rottweiler began almost twenty years ago when a longtime friend gave me my first Rottweiler puppy as a birthday gift. I didn't know anything about them except that I always admired the beautiful look of hers and I wanted one. I quickly learned that this particular breed was very special in many ways both good and bad. My first puppy grew up very quickly, very strong and had a mind of its own. It was very stubborn and had more energy than I wanted it to have. I didn't realize at first that the abundance of energy it had was her way of telling me that she desired more from me and needed to feel productive. Once she received some basic training so we could understand a common language she was excited to be given commands and tasks to do and was able to funnel her energy into something good.

While We've owned other breeds of dogs, it was apparent that this was the breed for me and when she reached two years old I sought out a breeder for stud services and bred her once. I fell in love with every puppy and ended up keeping almost every single puppy. It wasn't easy owning a Rottweiler due to the stigma and prejudice that many people have about such a wonderful breed. I was always judged, scalded, discriminated by many people including landlords. I had many problems with people always provoking, teasing and challenging my dogs to get them to do something that in their eyes would prove that I owned a breed that was dangerous and should be outlawed. None of my dogs every did anything to give anyone the satisfaction of saying anything bad about my dogs. Eventually I decided that if I was going to own Rottweilers I needed to own my own home in an area where they may be more welcomed and maybe in a street with limited traffic.

The new neighborhood and house we're perfect and decided to fly in a new puppy from out of state that came from show quality lines and one of the best proven temperaments I could afford. I invested $1500 plus shipping expenses and ended up being one of the best Rottweilers I ever owned. Personally I've never experienced any of the problems that people accuse Rottweilers of being. While I may have been called a terrible parent for not only having one Rottweiler but several around my kids, my kids nor any one of us including visitors every witnessed any aggression, violence or injuries of any kind coming from any of my Rottweilers. I have however seen the dogs that people have in their minds when they think of Rottweilers and are not necessarily Rottweilers but can be any breed that is owned by people who are cruel, lazy, irresponsible and that failed to provide the nurturing, training, leadership and attention that it needed to be a productive member of society that plays well with others. Same rule applies to people and you can't automatically assume that one particular race is better that others or more aggressive.

I have had the pleasure of sharing my life with several Rottweilers and many are now just a memory but the great experiences will always be remembered. I've never met a breed that is more loyal, devoted and more loving towards its human family than Rottweilers. Unfortunately there we're many years that life didn't allow us to have any dogs but now that we have moved to the country and on a small 5 acre farm they have once again been welcomed back into our lives.

While Rottweilers are not for everyone, they have been the perfect breed for me and my family. As stated before we rely on them to keep an eye on our farm animals, our farm, and to discourage trespassers. During the day our Rottweilers welcome our guests unto our farm but once the sun goes down they do a great job at letting everyone know to come back during business hours. One of our biggest problems on our farm in the past has been predators like coyotes that kill many of our livestock but they don't dare trespass now that our Rottweilers are hard at work.

We encourage you to learn as much as you can about this wonderful breed so that you can make an informed decision about whether the Rottweiler is right for you so that if you decide its the breed you want, it can be a lifetime decision and not a temporary one because you got yourself into something that you weren't prepared for. Its not fair to bring in any type of pet and then to have to find it a new home because of poor planning. 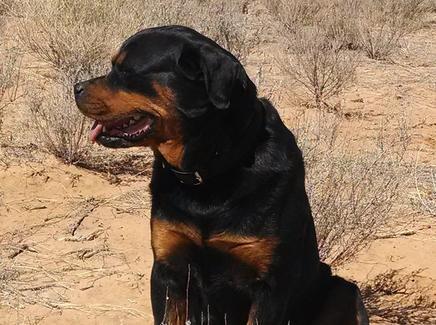 Our love for animals

Many of you may already know us from our parent website Wilber's Farm where we dedicate that site to farm and livestock animals. if you've gotten to know us you know that we have a passion for animals and believe in old fashion ways of naturally caring for them, holistic approaches whenever possible and respect for the land and animals we depend on.

While some people see dogs simply as pets we see them as family members that we rely on in part for the success of our farm.